We have started a crowdfunding campaign on Indigogo to fund the electronics for the orange Quadmaran-5 and for the total costs for 2 Quadmaran-10s.

You can click here to donate but the pitch video is:

Please help by donating or sharing the link.

Thanks!
Posted by Vincent Cate at 3:32 AM No comments:


The GPS track shows where we put the boat in the water, where it went, where we carried it back up the beach when we were done, and where we had breakfast to celebrate (Roys!).   The boat spent a lot of time near a catamaran located by one of the waypoints, so there is a lot of red there. 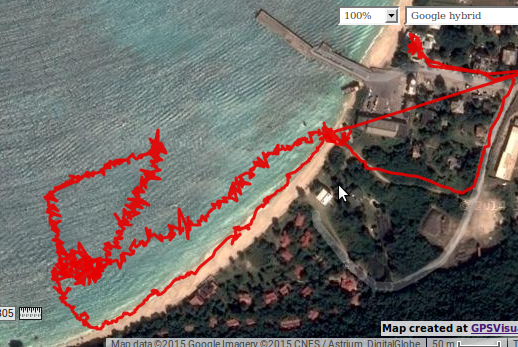 I think it moves about 1 MPH.  We need to test this more without obstacles and upwind, downwind, crosswind.  Also, different propellers can make a difference so there is more experimenting to do there.   We will probably put on 2 more motors on the other 2 floats at some point.  Also interesting to try different speed motors.  Lots to do, but off to a good start.
Posted by Vincent Cate at 8:15 PM No comments:

We took the boat out and tested in manual mode.  The wind was about 20 knots and the box on the back acted like the fins on an arrow making it hard for the boat to turn and face downwind.   Decided to move to a more protected location tomorrow for the very first auto-pilot voyage. 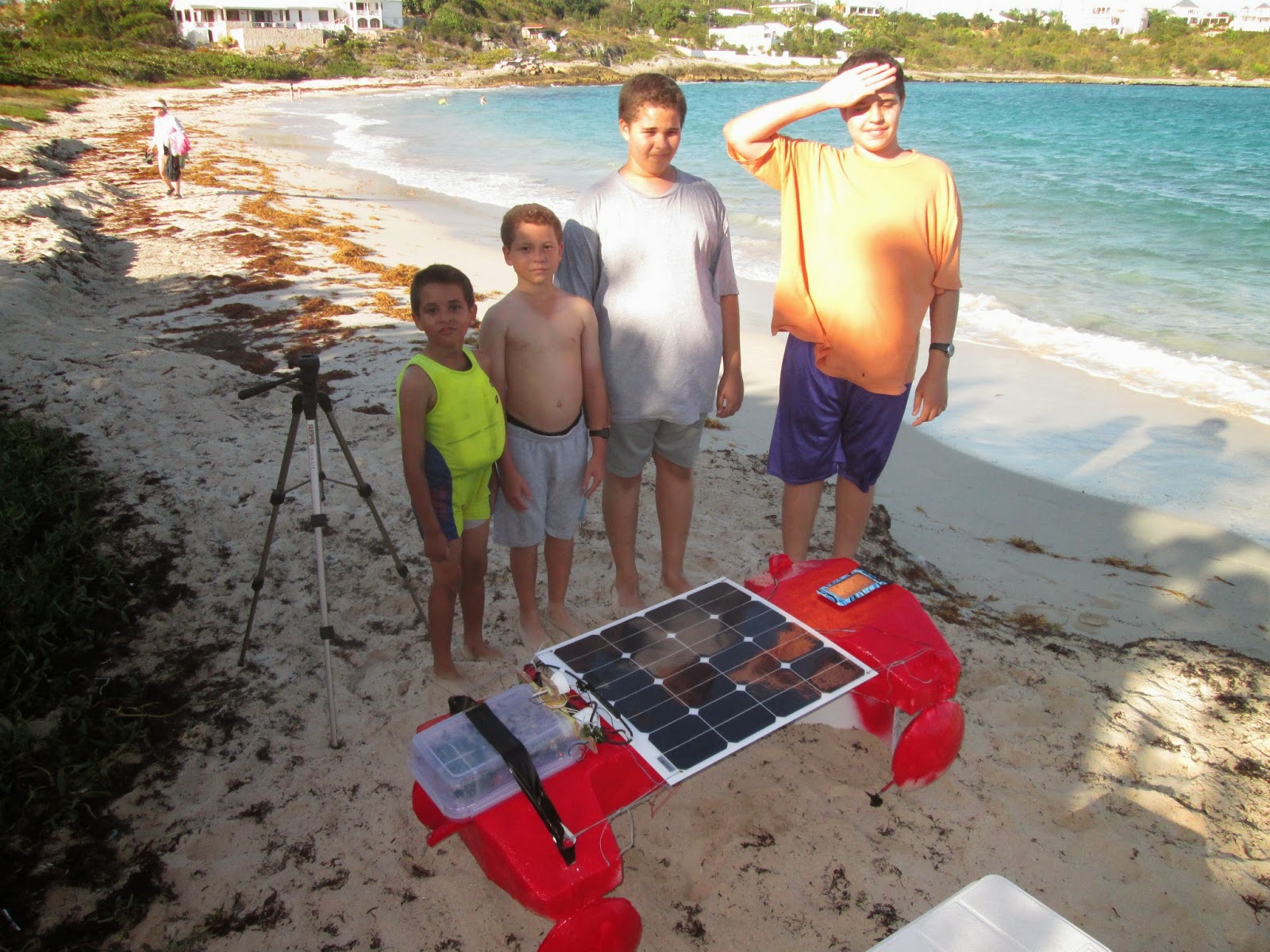 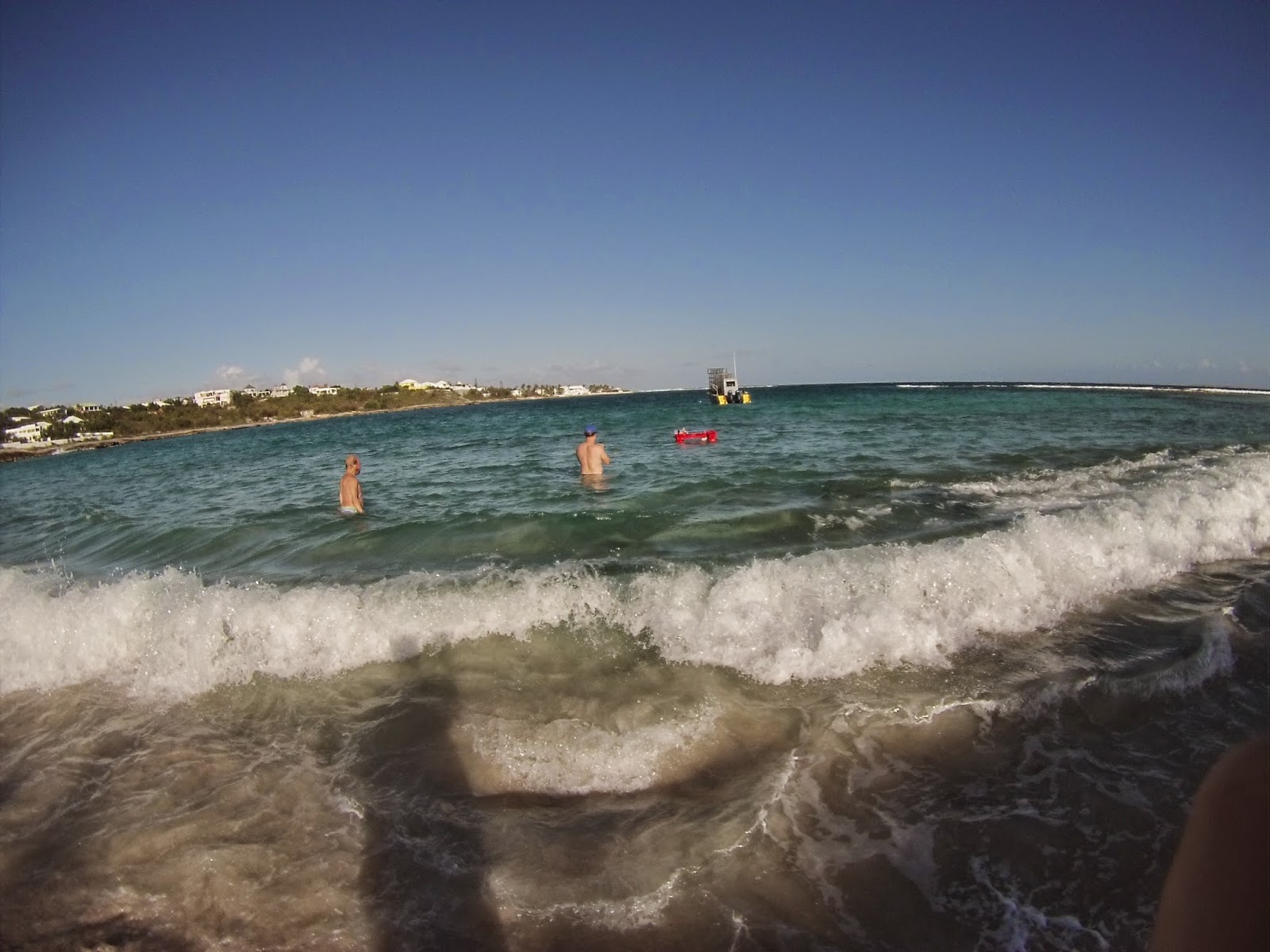 The waves were tolerable but the wind was a bit much.  If you think of this as a 1/20 scale model of a 80 foot boat, these winds are like 200 Mph.  This is crazy wind for a small model.  Still, if we had motors on all 4 floats we could have handled it.  :-) 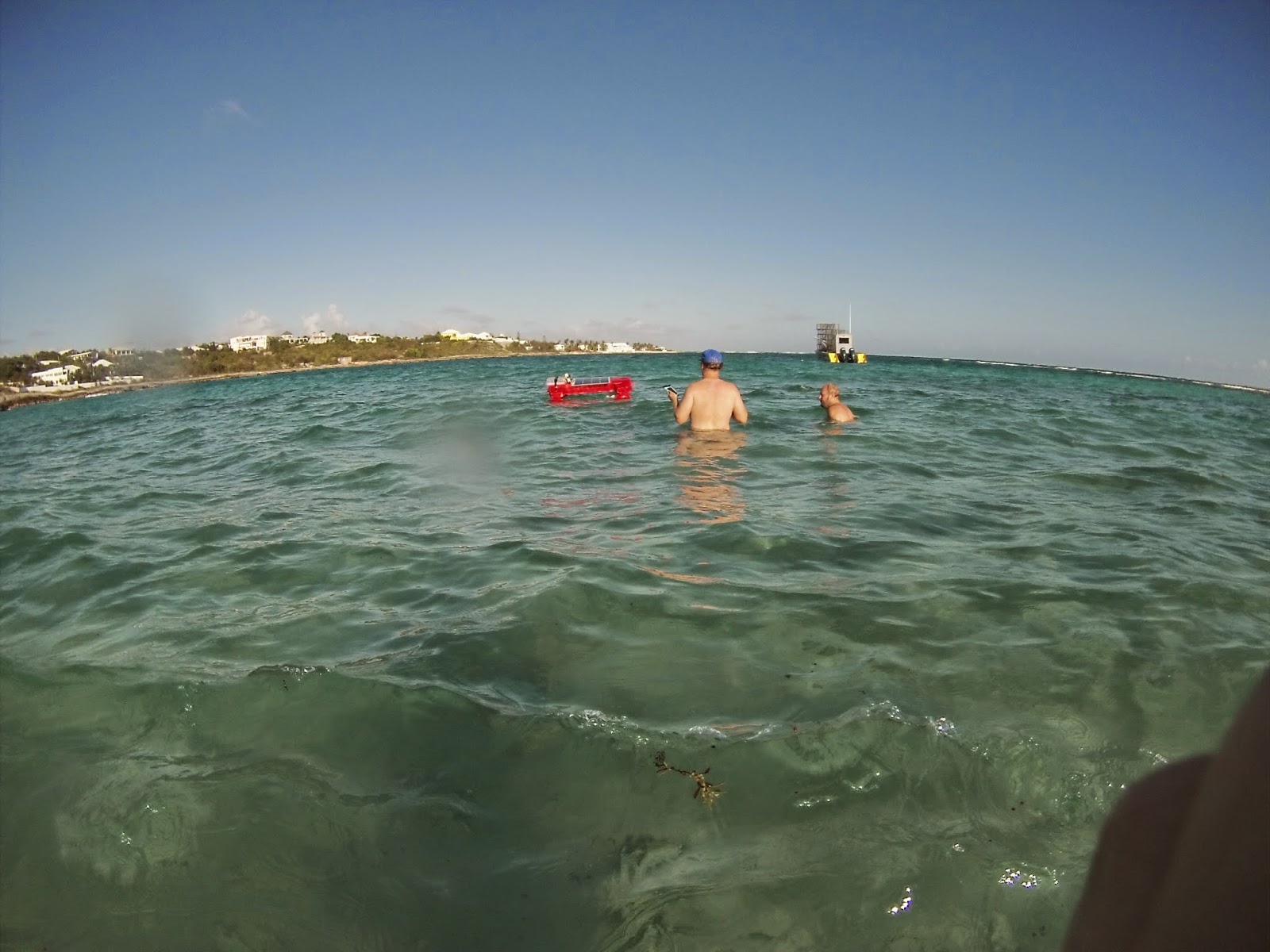 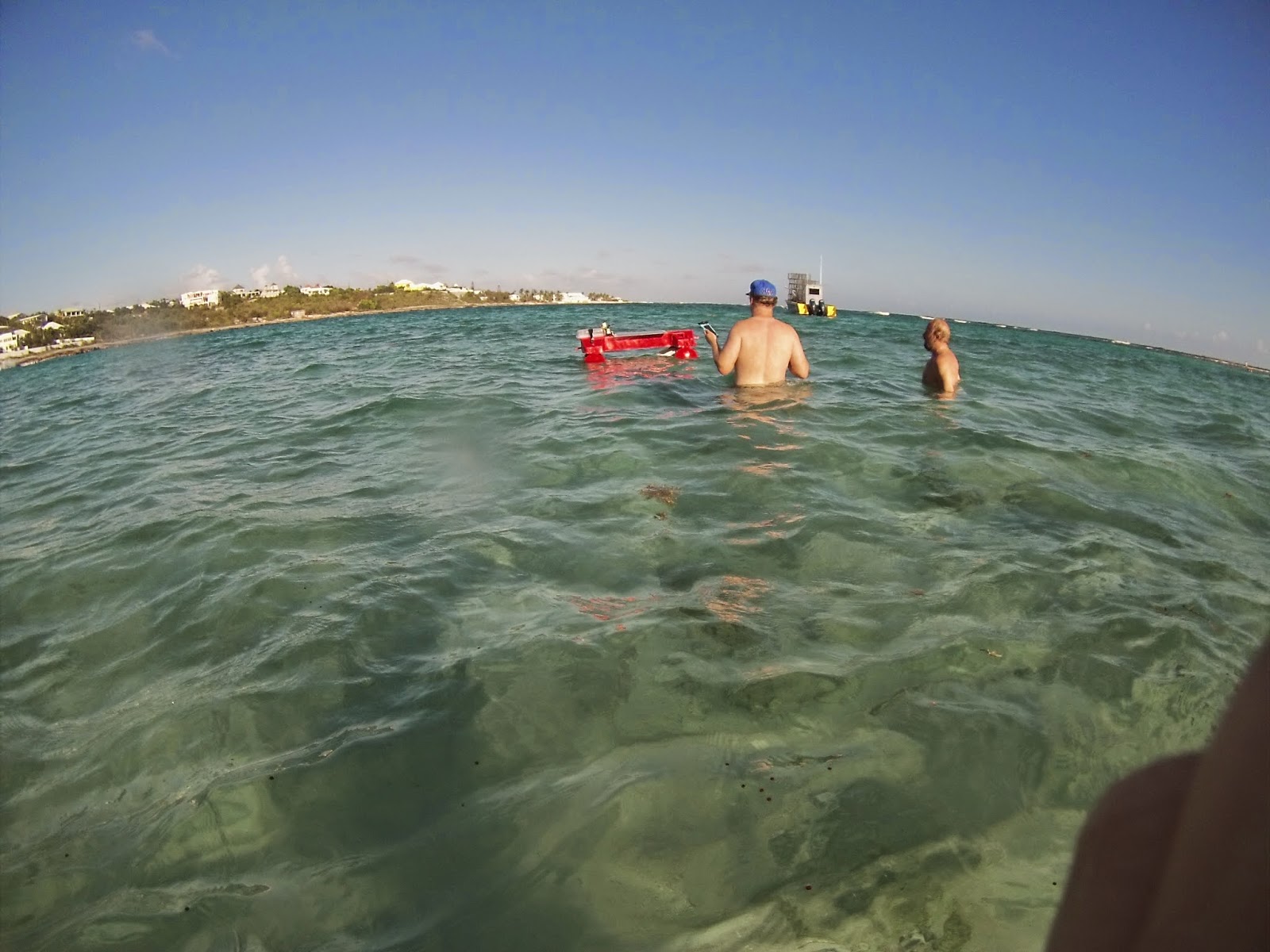 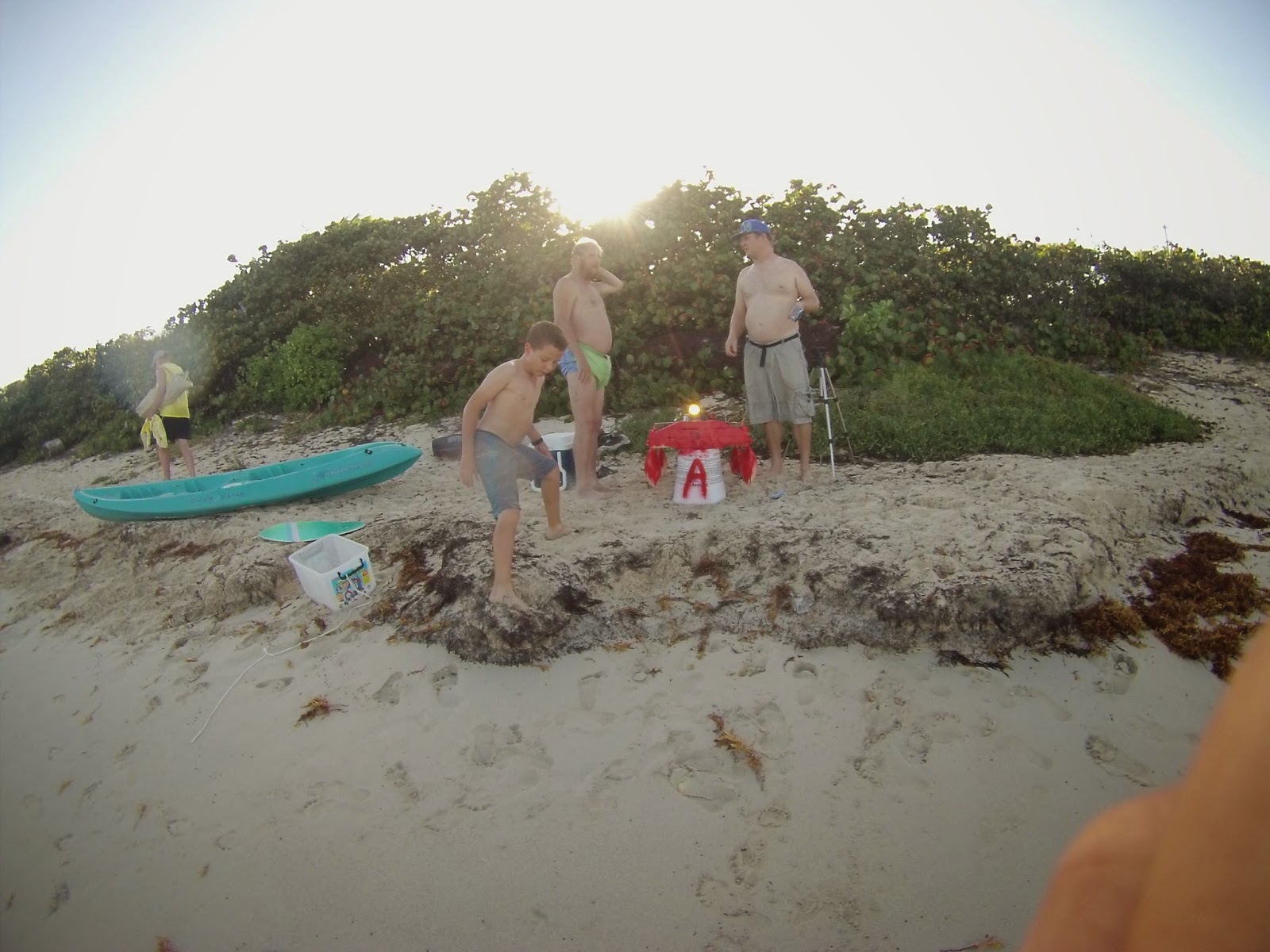 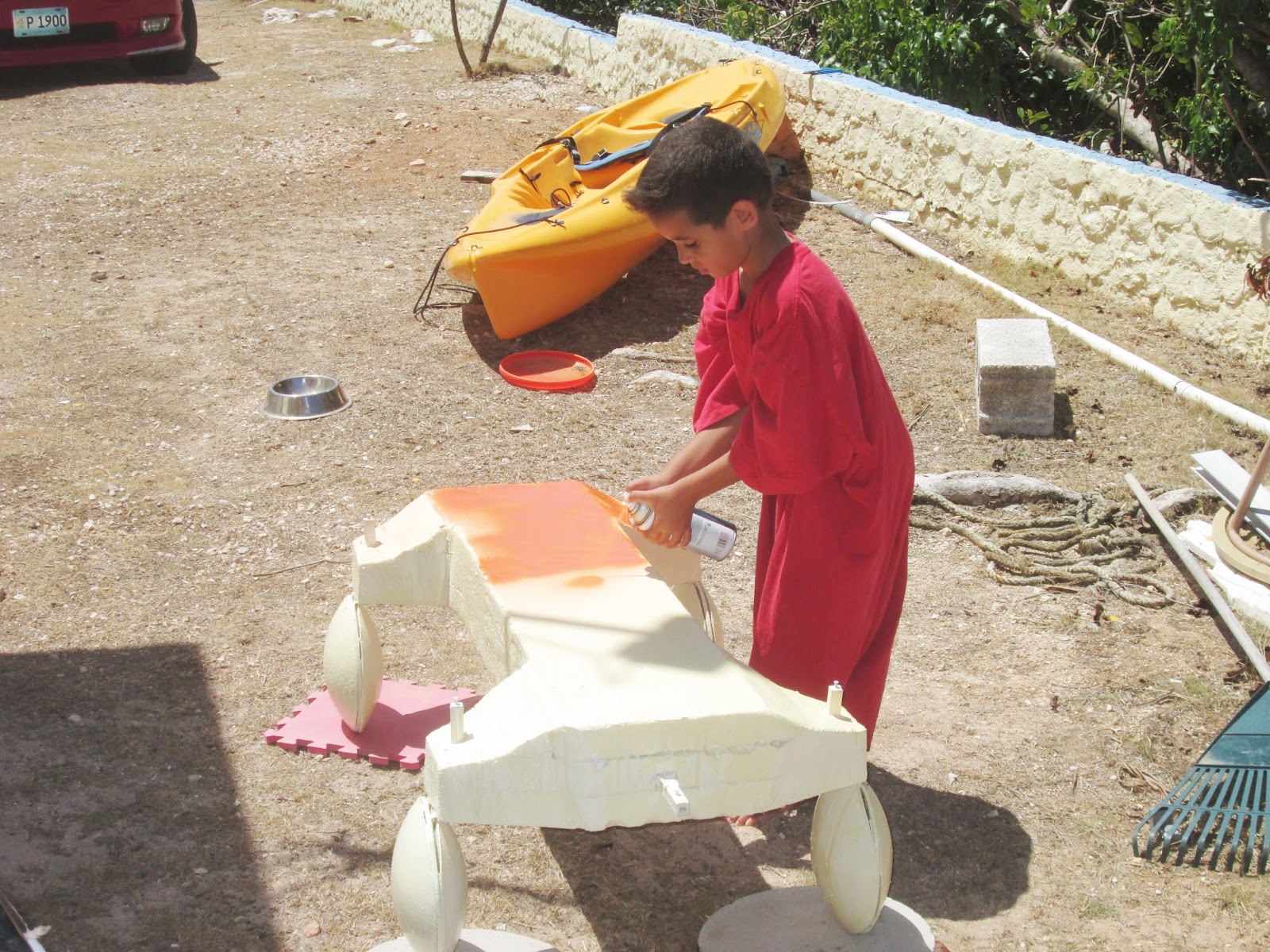 Corey painting Orange boat (with no motors yet) 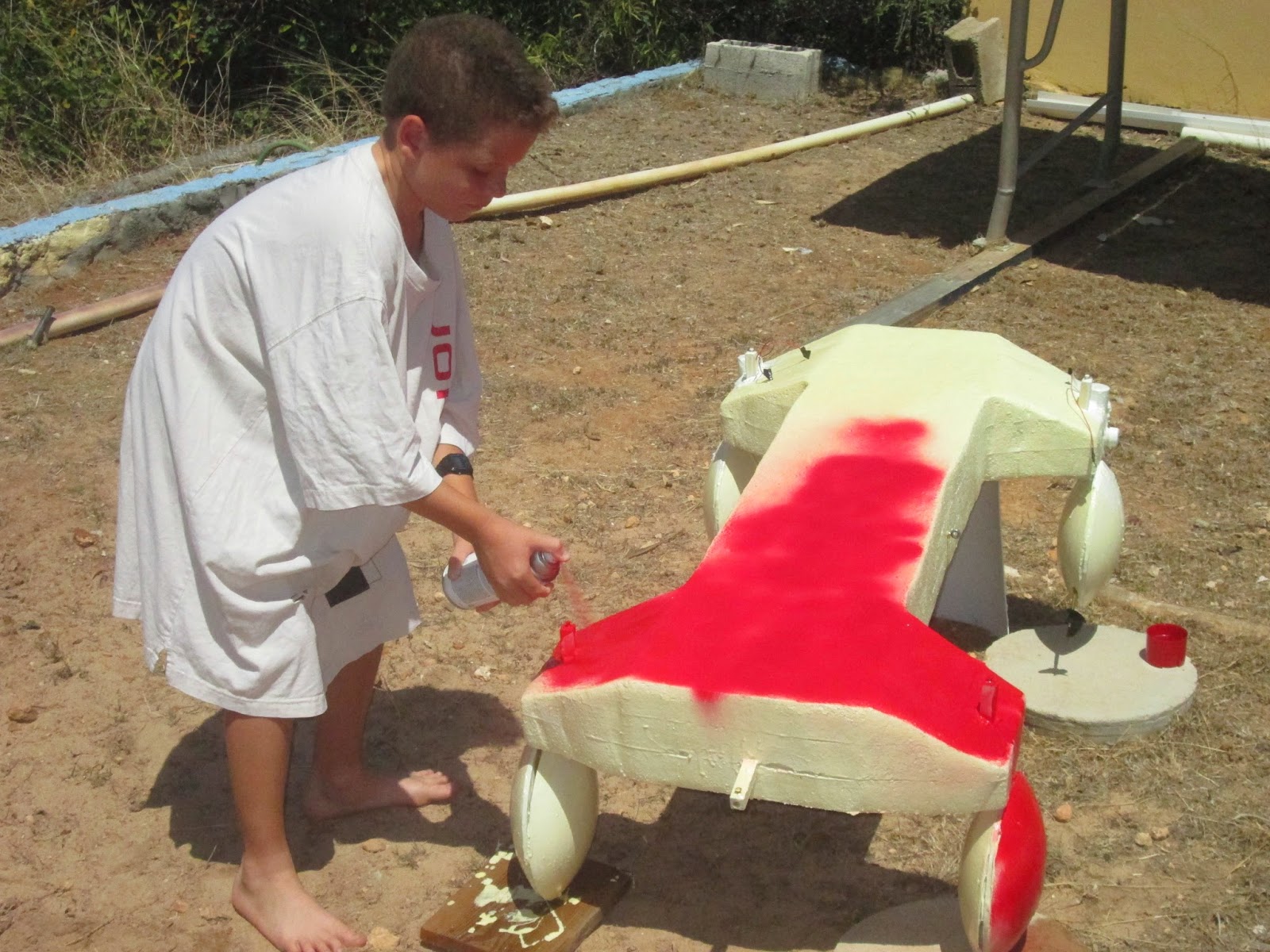 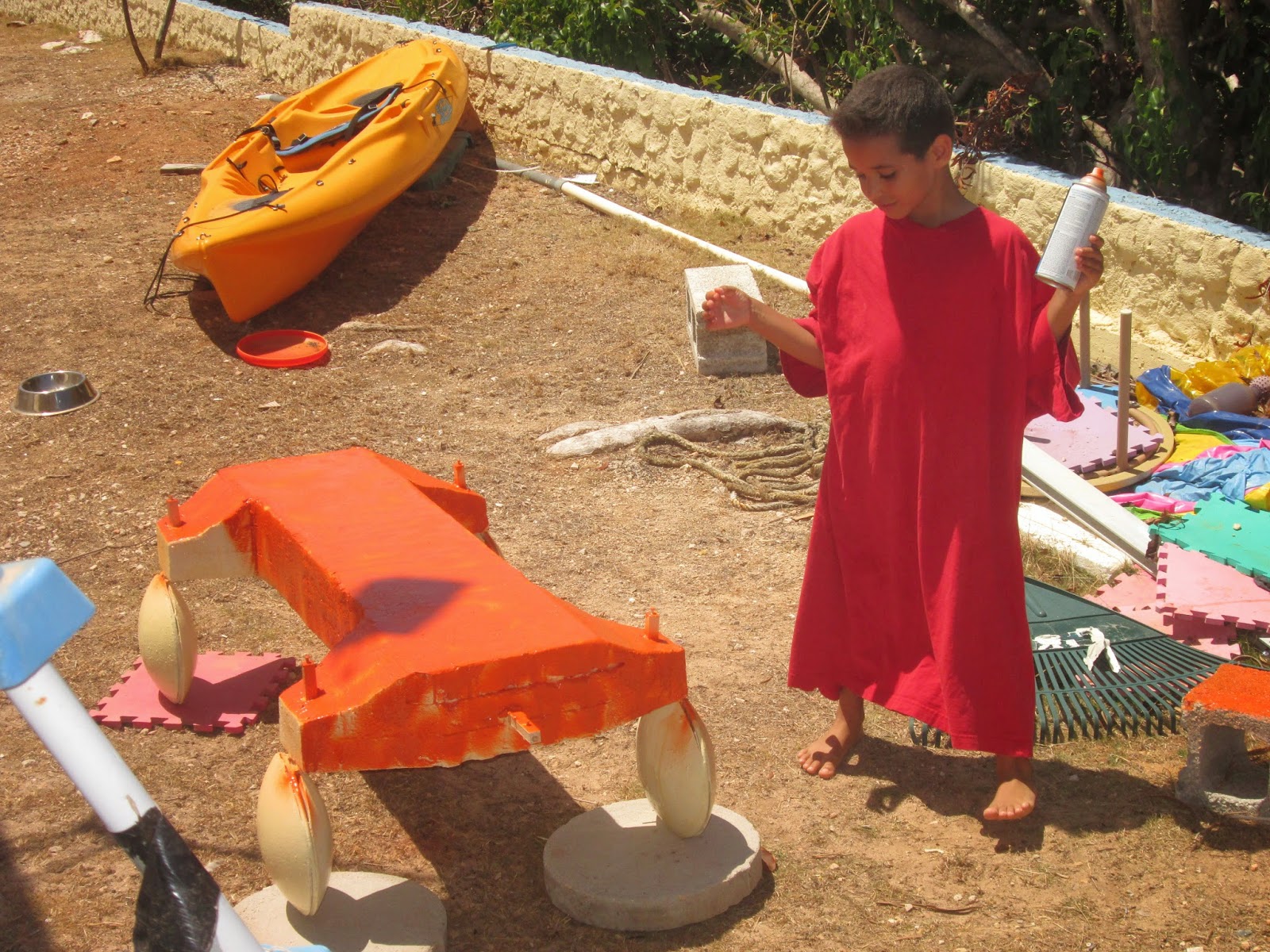 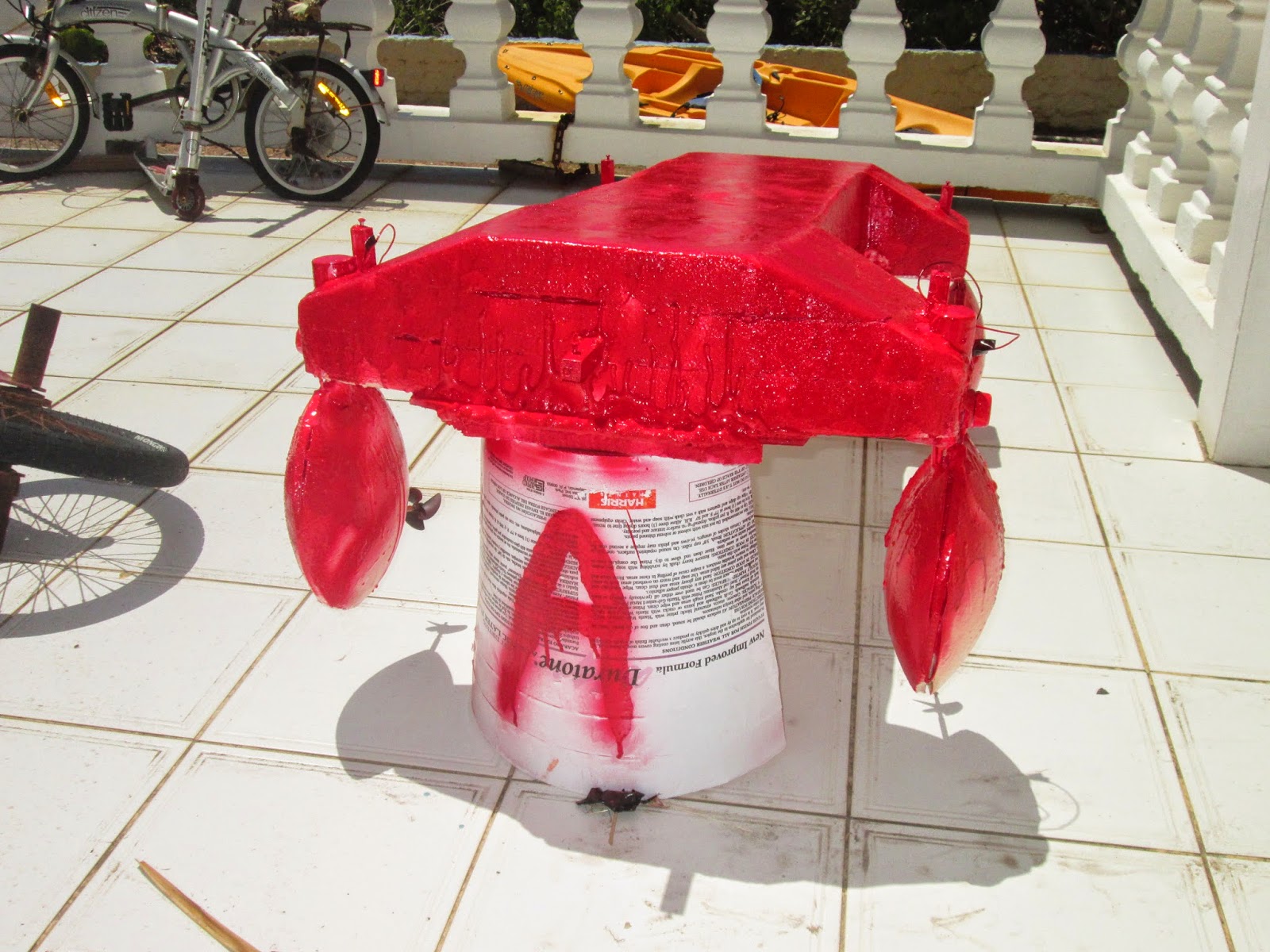 Just in case you forget who painted the red boat. 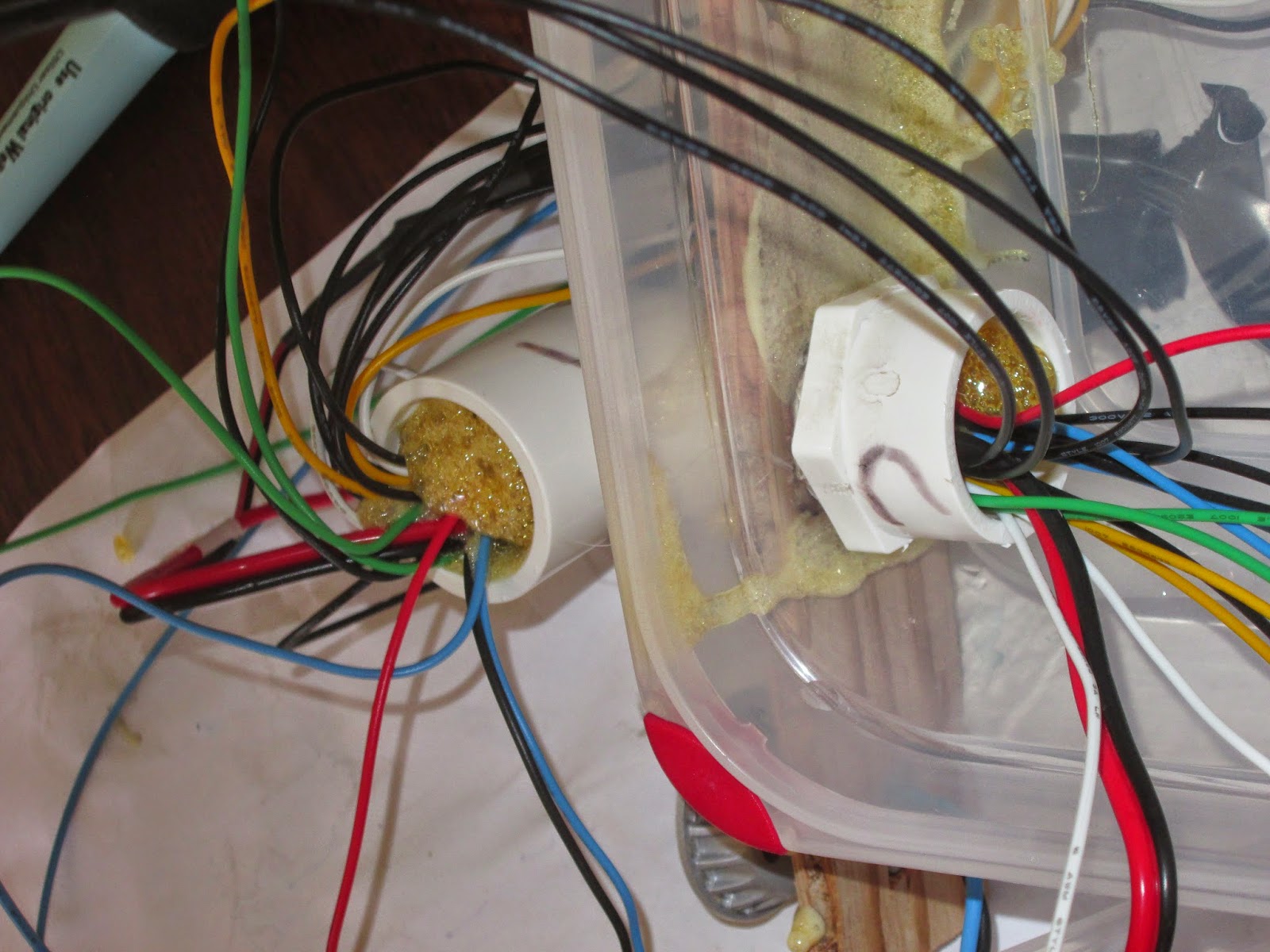 Put the Gorilla glue expanding foam into the PVC elbo where the wires come out of the waterproof container. Phone goes into waterproof case for phones.  We put velcro on the back and on the boat.   So we can operate in manual mode, test that things are ok, switch to auto-pilot and stick the phone on.  Some day we will have to plug the phone in so it is getting power but for the current stage of testing we are not close to using up the phone battery.
Posted by Vincent Cate at 5:16 PM 1 comment: 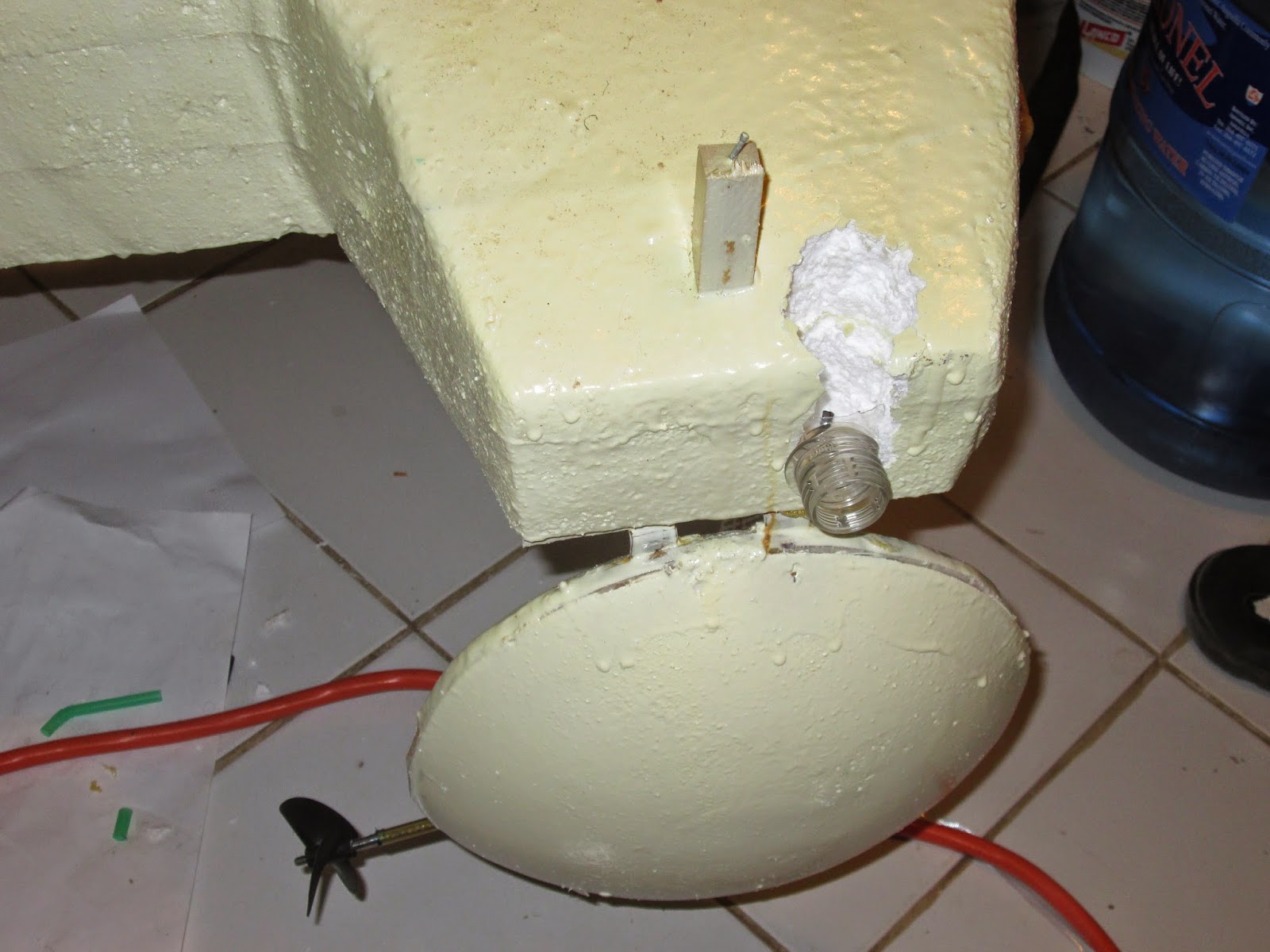 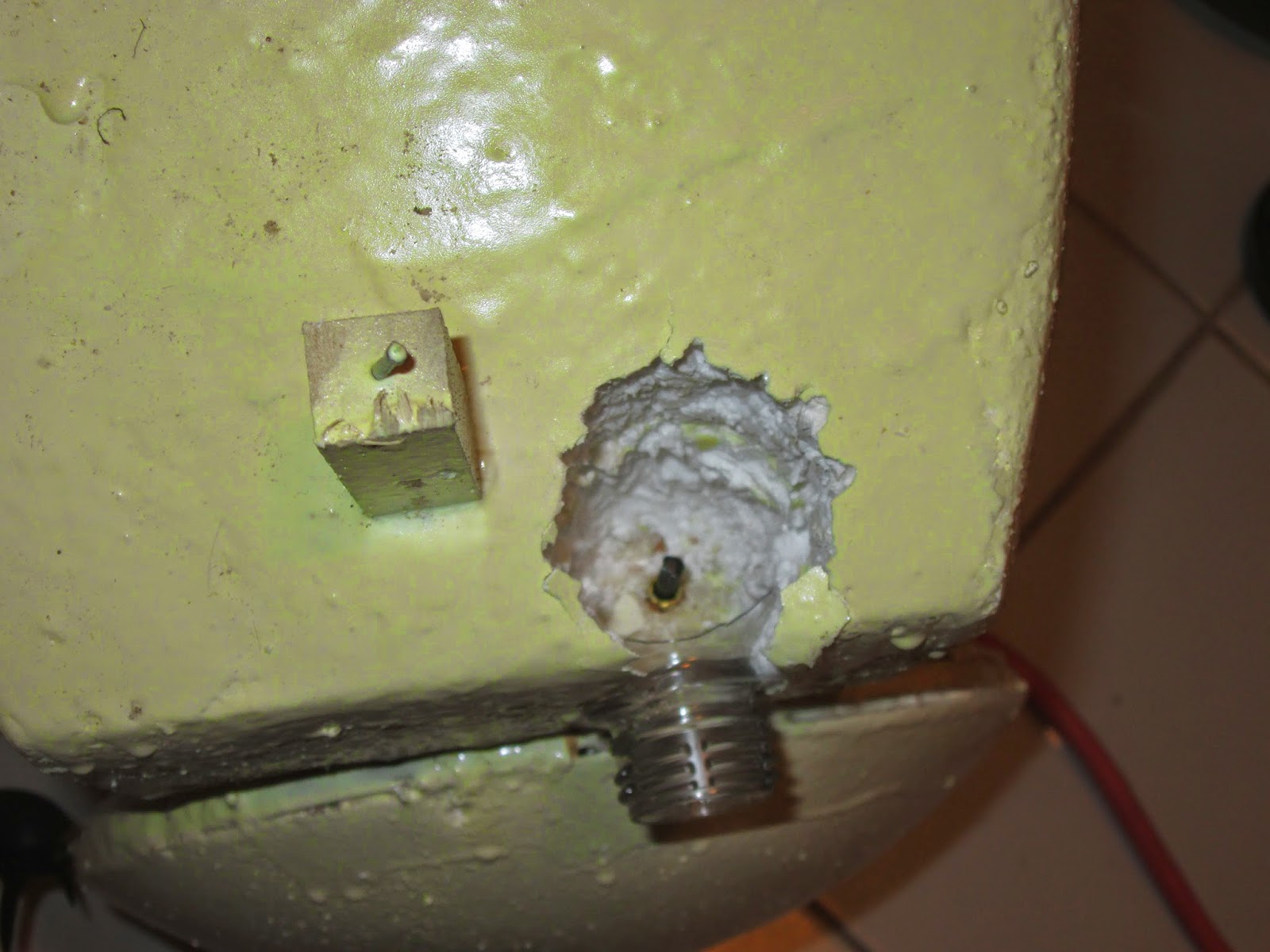 I used the top of a waterbottle as a waterproof opening to the engine compartment.  This way I can disconnect the driveshaft to inspect it,  greese it, replace it, or try out a different propeller. 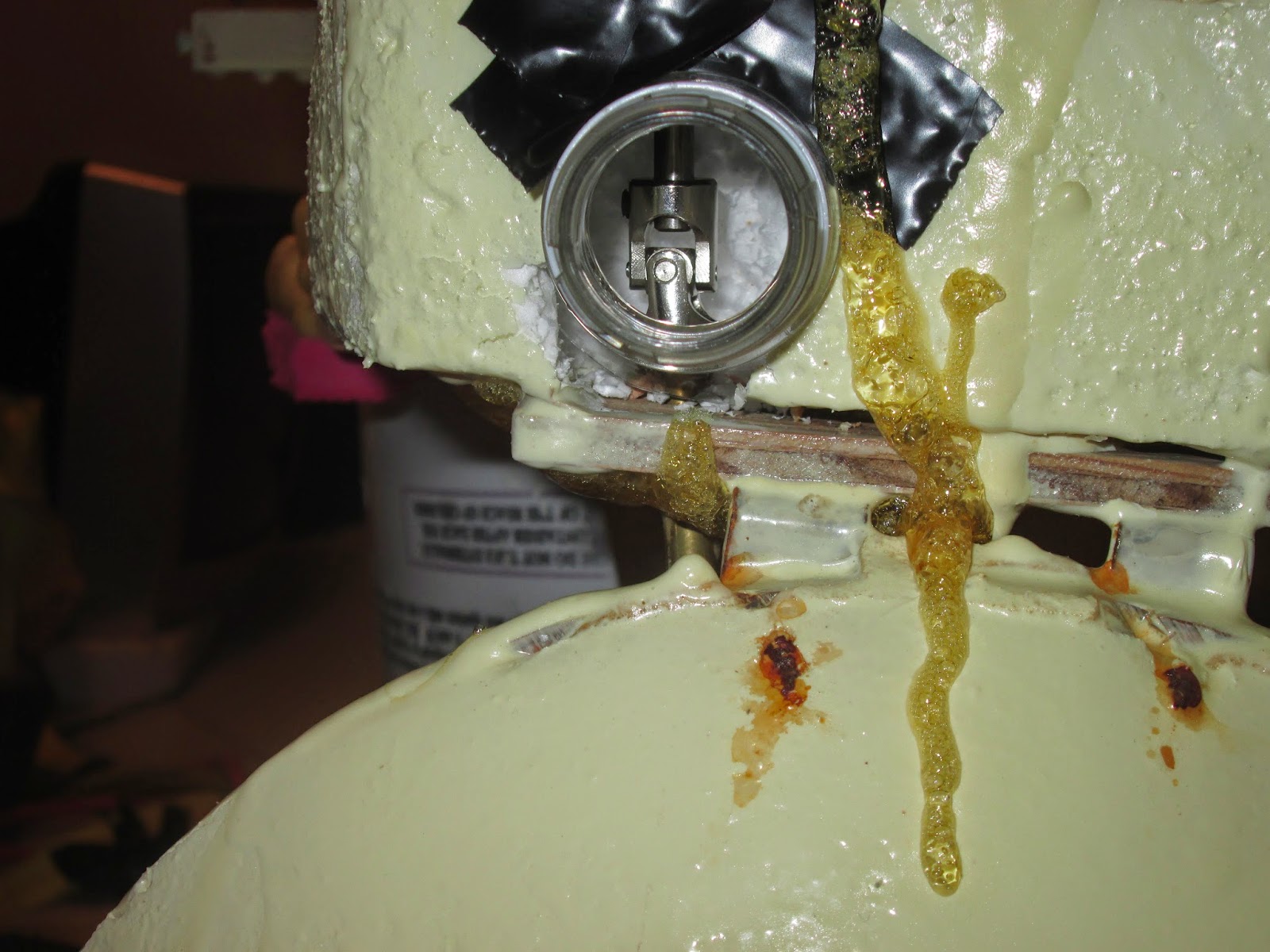 Put some Gorilla Glue around the engine so it is firmly held.  Filled in openings with electrical tape or bits of foam and covered everything with styrospray paint.  Note lid on engine compartment opening below. 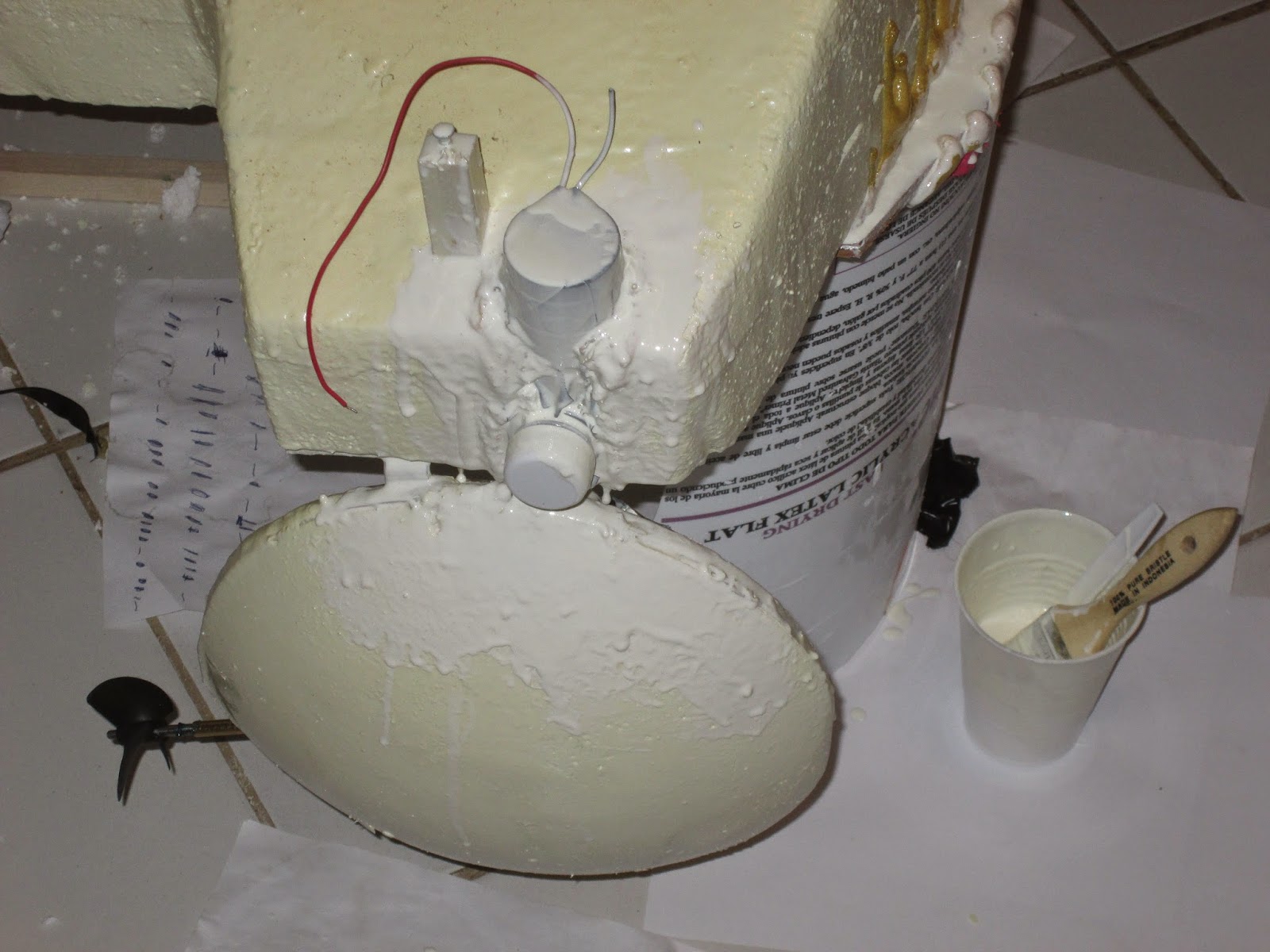 Note that the water break makes a nice stand to keep the propellers off the ground.   The water break should also help if we catch a big fish which pulls harder than the motors can.

Now we just have to spray paint it and connect 4 wires from the electronics box to the 2 motors.   So we will almost for sure launch Saturday at 4:00 in Sandy Hill  Bay (left side as you drive in).   We will probably be there till dark.  You should be able to see where the boat has been in real time with this online map but you may have to pan over to Sandy Hill Bay.

Some of the results we hope to get (assuming it keeps working and time permitting):

We will take pictures and video and post them.
Posted by Vincent Cate at 9:13 PM No comments:

Our phone app now saves status updates, including GPS location, to Google's Fusion Tables about every 20 seconds.  This generates a map in real time.  As the boat moves around the map will update if you refresh your  browser.  We will post to facebook before putting the boat in the water so people can watch live.   Pictures going to the Internet live are not reliable enough yet so we will probably have to post those to this blog and facebook after the boat is back on land.  Click satellite below for satellite image.

If you click on a dot in the map below it will tell you the other information in that row in the table.   The numbers are either a current value or computed over the last 20 seconds.

We have a new phone that has both GPS and Compass at once, this is making our testing much easier, 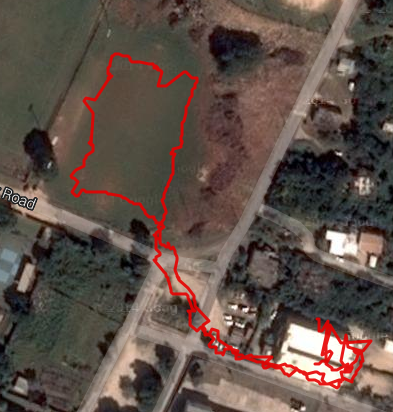 It's not pinpoint accurate but it's good enough.
This shows the track we took, from our home-school office, to the field and back

The only thing we are missing now are some brass pipes for the drive shaft.
They should be here this week.
Posted by Unknown at 6:43 AM No comments:


We will have to try some fishing with our robot boat at some point.  I am collecting a few ideas here and will update over time.  Feel free to comment with more.

To start with we could just have it tow a short line with bait and hook.  To start we could just send it out for a fixed time.  But eventually we would like it to be able to tell when it caught a fish.   Could set it up so a struggling fish on the line made a bell ring and use the phone's audio input to detect this.  Can also use the gyro/tilt/acceleration sensors on the phone to tell when a fish is fighting.  The boat has such a gentle motion in the water that any sudden movement is probably from fish.  The phone has a proximity sensor which can detect when something is within 8 cm of the top-front of the phone.  We could attach some duct tape to the poll such that if a fish pulled on the poll and bent it down the duct tape would go in front of the phone.  Also the boat will not be able to go as fast when fighting a fish and could even go backward while thrusting forward, both of which are detectable since the phone has GPS.   With some combination of these we should be able to get a reasonably reliable "caught a fish" detector, at least for large fish.  Small ones we could leave on as new improved bait.

Can also put an electric reel and small pole on the boat as some RC fishing boats have done.  There are even electric reels with bluetooth control, so our phone could control them, though this looks a bit bit for our quadmaran-5.  Next model could handle it.

You can get bluetooth fishfinders.  So our software could see where the fish are and keep on top of them.

There are bait boats that put some bait into the water.  We could do this as well.

You can have the boat pull the end of a line from a regular fishing poll on shore with something that lets go when the fish pulls.   We could buy this or make something like it with a rubber band holding a loop in the fishing line.

We could have the boat pull a long line of many fishing hooks out far into the ocean.  Maybe a half mile or mile.   Then hold the end in position for some time, maybe a half hour, then we could pull the line back in from shore.   This would be a lot like kite fishing but not needing wind, with better  control over where the end of the line went, and not having to pull so hard when it was time to pull the line in.

We will be working on the ability to have the boat dock with another boat using an electromagnet.   So one idea is to dock with a buoy above a trap and pull up the trap.  We could make a small trap.  Could also have it send a picture to shore so we could see if there was fish in the trap before it brought it in.  Or software could figure out if there were fish.

I could even imagine a robot boat using a net to catch fish but probably our Quadmaran-5 is too small for this.  Might try something with later larger models.

Posted by Vincent Cate at 6:16 PM No comments:

We wanted a curved hole through the styrofoam in the float for the driveshaft and made one using a curved pipe and some acetone.


We have lights on either side wired to the same relays as the motors.  So if a light on the left is on the left motor will be on once hooked up. We tested this  going up and down the road in front of our house and it works.  So depending on which way Amoni is pointing it will turn on left, both, or right lights.   The phone on its own seems to have a more reliable compass than when next to all these wires.  I meant to twist pairs of wires together (which would nearly keep them from making magnetic fields) but forgot.  Will probably just put the phone on the boat a bit away from the other electronics.

We are still having to use two phones, one for GPS and one for compass.  This is not as reliable or fast as one good phone would be.  The phone company got in new phones with a compass but they were all gone when I got there.  So I have ordered one on Amazon and should get it next week.  I think we can launch the boat next week.   Will let you know when we do!
Posted by Vincent Cate at 10:14 AM No comments: