Up till now we just used a BlueTooth relay controller to turn things on and off, including the motors.  We now have a real motor controller.  This can do forward and backward and variable speeds.   It is from the same company and is controlled similarly from bluetooth.
It can also run off of 12 volts, so we just have to give it power from our 12 volt battery.  So this does not need USB power.

Here is the link for TinySine/MotorAir bluetooth dual motor controller. The documentation incorrectly says the commands are:


A last run in the ocean did not get posted because the phone overheated and shut down our app.   We can now monitor the phone temperature over the Internet.  I wanted to see if we put the phone under the solar panel if the Compass, GPS, and Internet connection would all work ok.

We I put the Quadmaran-5 on a wheelbarrow so I could go up and down the street.  This picture shows the phone in front of the solar panel for the control tests, it was later put under the solar panel.   As I turned it turned motors on and off the right way just as quick, so the compass seems fine under the solar. 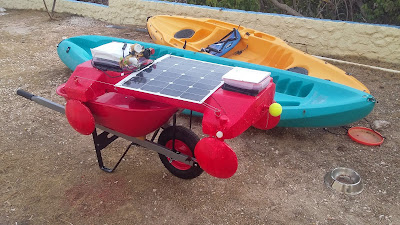 The Internet status report still came in every 20 seconds, and the phone signal strength seems good.  So Internet is ok with phone under solar.

So it seems ok to put the phone under the solar panel..

We got a toy called Robosapien.  It walks around, movies its arms, and makes noises.   It has a little battery powered thing they a call "the dongle" that plugs into the audio jack on your cell phone and makes IR signals.  Then you run an app and you can control the robot from your phone.

So we recorded the audio signal for each of the commands and then made our own app to generate these.   Our thinking was we could use the cell phone compass, acceleration sensors, gyros, camera, etc.   With vision we could do fun things like go toward a red ball, then hit it, then go find it again, etc.

Today was our first test.  The dongle has two red LEDs that light up when you do commands.   We could test our app and it did play the recorded sounds when we pushed our buttons, but the LEDs on the dongle did not light up and the robot did not move.

We used Audacity to amplify the audio so it was as loud as it could be without distortion.  Still did not get anything.   Not sure yet why this does not work.

It turns out that there are audio files you can download to control WowWee toys.  This worked for us.  Both from App Inventor and from Java we can get our own software to control the toy!

Next to play with computer vision! 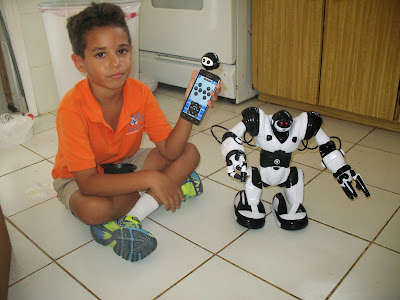 Posted by Vincent Cate at 2:19 PM No comments: