There are a few other student/hobby projects to make ocean going solar robot boats documented on the web.


The Scout Transatlantic is a 12 foot long solar robot boat.  It used a trolling motor and a rudder.  It made it over 1000 miles into the Atlantic. 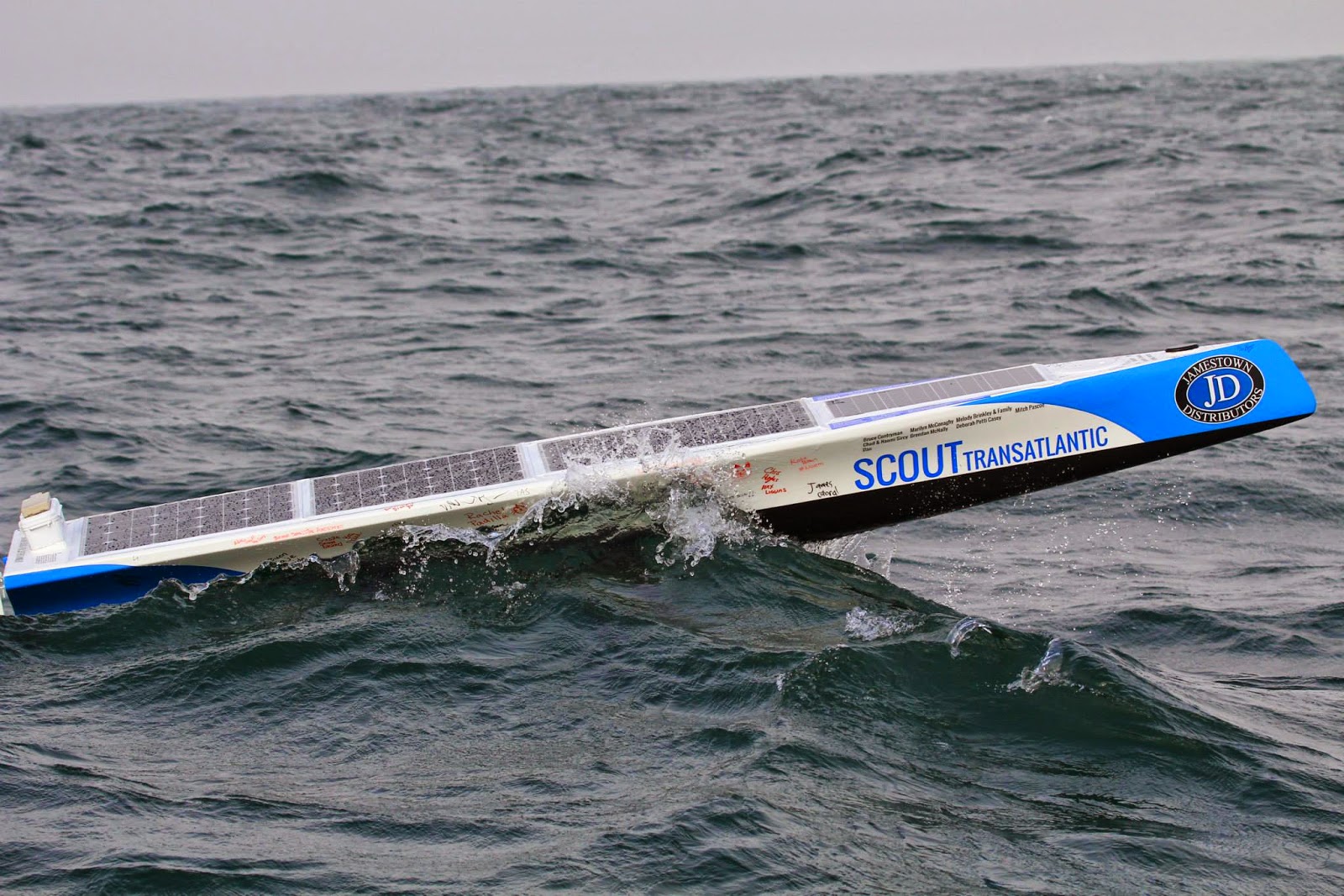 Scout uses two Arduino Mega microcontrollers; one to handle navigation, and one to handle sensors and communication.  Some electronics for Scout below: 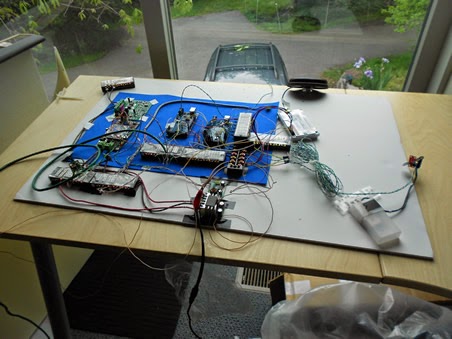 
The FishPi is also a solar robot boat.  FishPi uses a Raspberry Pi.  Also using a trolling motor and rudder.   It seems a lot of electronics work was done to get GPS, compass, controllers all working.  Not sure it was ever tested in the ocean.

The Piribot uses Arduino controller and Android Phone.  It is 1.12 meters long and has a big keel.  Their goal is to cross the Mediterranean north of Alexandria.  This is more than 1000 km but not as rough as the Atlantic.  Were estimating June 2015.


Thoughts on how we differ from previous solar robot boats 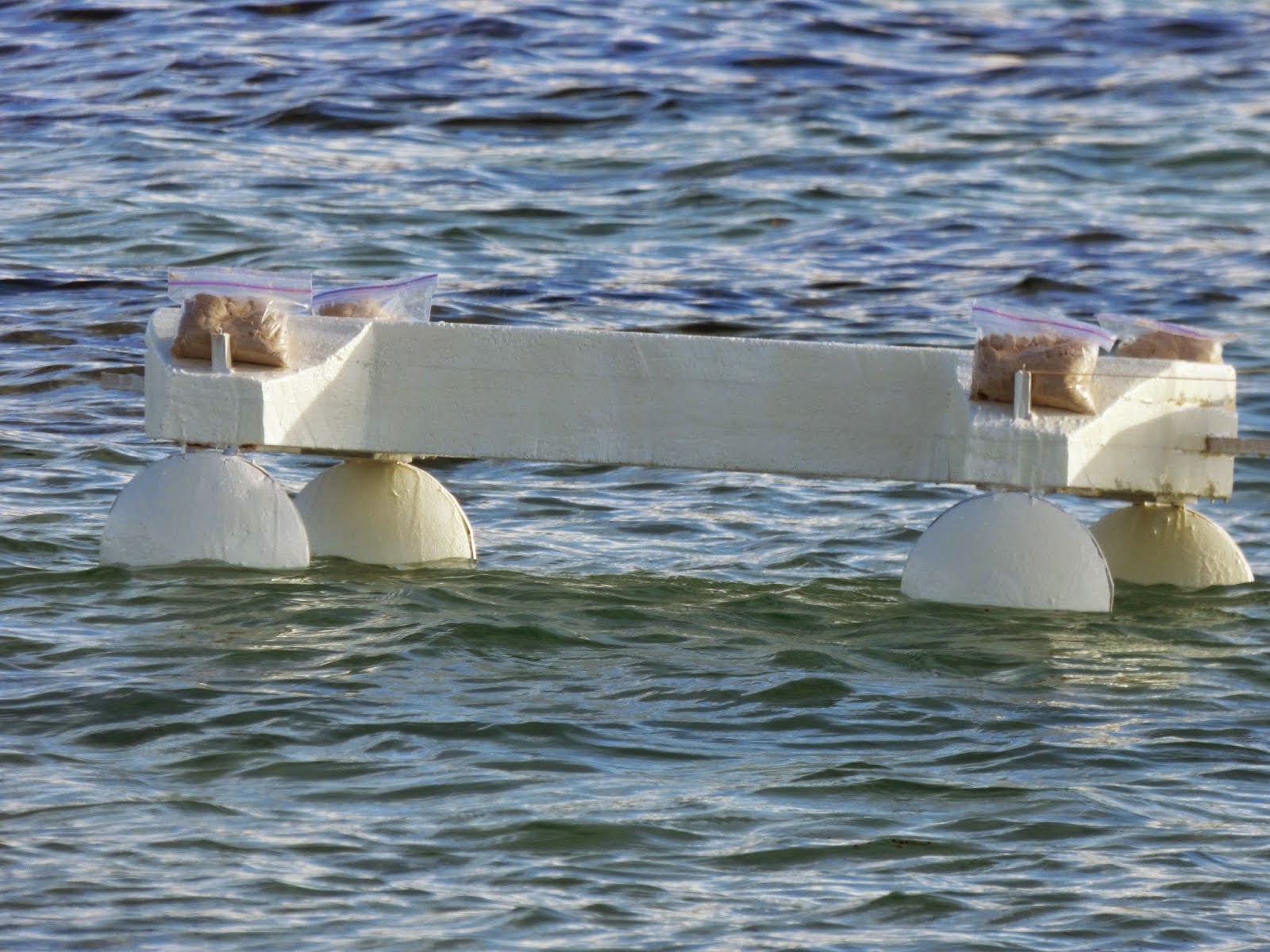 In our design we are using an Android phone with compass, gyro,  GPS, communications, and camera,  and not developing any new electronics.  Since the only software we have to write is for the phone, our software development environment seems much better than what these projects had, so it will be easier for us to get the software working.

We are working at a smaller scale, like 1/10th the weight of scout.   This means we can make a model out of styrofoam and cover it with styrospray.  This is far easier than what they had to do to build Scout.

For the weight of our boat we have a very stable design.  Waves will not spin it left and right and we think it will take waves larger than usually seen in the Caribbean to tip it over.  The models we have so far are probably not ready for the Atlantic.  If we build a bit bigger model and put a battery inside each float we could make a self righting model.  Then I think we could cope with the Atlantic in the right time of year and right path.

We are using 2 motors and steering by turning motors on and off, with no rudder.

Since we are using little motors we can easily put on 4 motors.  This would let us keep working even if one failed.

We will probably have some sort of water brake (tested version 0.1 already).  This will help the boat stay in place if we have to rescue it or stay in place overnight after the battery runs out.

The other boats went for satellite link.  For some time we will stay near islands in the Caribbean where roaming by our phone is probably good enough.  May eventually get a sat link.

If you spend years making one boat and it is lost at sea, that probably kills the project.  Our hardware will be so easy to build that as long as we have money it won't be too painful to build another version if we lose one.   Our main investment will be in the software which will not be lost if a boat is lost.  :-)

Our work is leading toward a human scale solar boat of similar design (quadmaran).  So software development and experience with this type of design is working toward a future project.

Also, we are want to be able to have boats dock together while in the ocean.  So one boat could rescue another.   Also working toward human scale boats that could join together in the ocean.

The wave powered wave glider has some solar for electronics but not propulsion.

Underwater gliders that use change in boyancy to glid forward while going up or down.   These are underwater and not solar powered, but interesting.


There are a number of sail powered robot boats that use solar for electronics.  For example, ASV Roboat.  There is even a World Robotic Sailing Championship. It seems a students at the University of British Columbia have won this competition several times and are now planning to send a robot sailboat across the Atlantic.

There is a Solar Challenge - World cup for solar powered boats but these are with human, not robot, drivers.
Posted by Vincent Cate at 5:54 PM